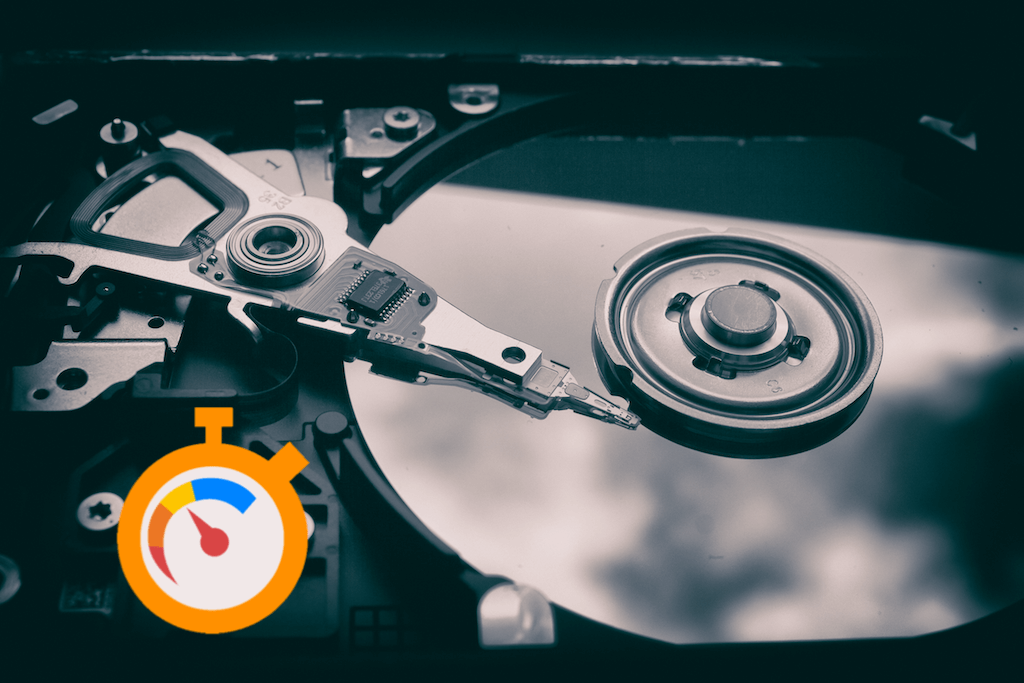 This is NOT an all-in post about ZFS performance. I built a FreeBSD+ZFS file server recently at work to serve as an offsite backup server. I wanted to run a few synthetic workloads on it and look at how it fares from performance perspective. Mostly for curiosity and learning purposes.

As stated in the notes about building this server, performance was not one of the priorities, as this server will never face our active workload. What I care about from this server is its ability to work with rsync and keep the data synchronised with our primary storage server. With that context, I ran a few write tests to see how good our solution is and what to expect from it in terms of performance.

When it comes to storage performance, there are two important metrics that stand above all. Throughput and Latency. In simple words, throughput, measured in MiB/s is the maximum amount of data the system can transfer in/out per time. Latency or response time, measured in microseconds or milliseconds is the amount of time taken for an io to complete.

Coming from a storage performance engineering background, here is how I approach performance benchmarking.

The goal of benchmarking is to simulate as realistically as possible the workflow that the system is going to support, measure the performance of the system and its subsystems, identify bottlenecks, tune subsystems one by one, effectively removing all bottlenecks until desired performance goals are achieved or reaching a state where a bottleneck cannot be removed without physcical change to the system.

All that said, I dont intend to spend my time removing all bottlenecks in our ZFS system and make it the fastest ever!. My goal for this post is only on the measure phase of the cycle. Lets get started.

What attributes do I care about? 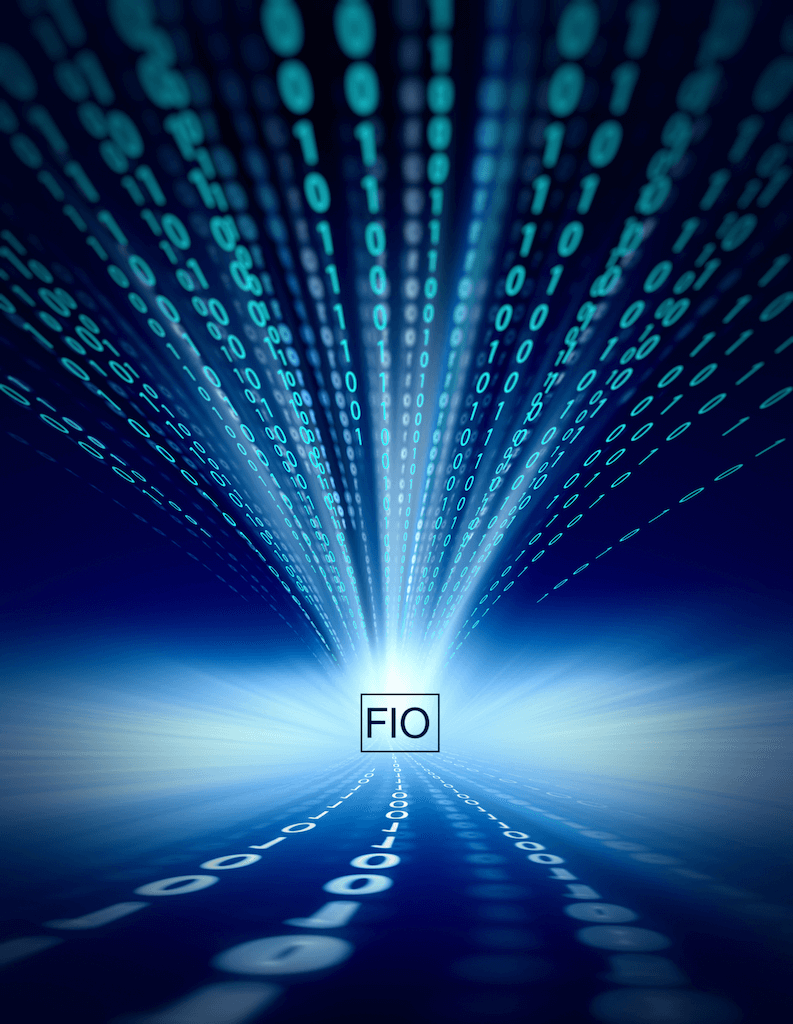 Fio is an I/O testing tool that can spawn a number of threads or processes doing a particular type of I/O action as specified by the user, and report I/O performance in many useful ways. Our focus is on throughput and latency.

Our goal here is to measure sequential write performance. I’m going to assume block size to be 128 KiB as ZFS default record size is 128K.

Install fio as per instructions on its website. Prepare a job file - write_test.fio that we can customise for several tests.

kb_base instructs fio to use the binary prefix system instead of the decimal base(Kibibytes(1024 bytes) instead of kilobytes(1000 bytes)).

size is file size and is set to 2 MiB.

directory specifies where test files are created. numjobs is our tunable for unit of work. Example, 10 will instruct Fio to spawn 10 processes each independently working on it’s own file of size - file size specified earlier.

numjobs is the number of processes that FIO spawns to generate IO. Each of the spawned process will create a file of size specified earlier, and generate IO to that file independent of other processes.

buffer_compress_percentage is the knob that controls the compressibility of the generated data.

refill_buffers instructs FIO to refill the buffer with random data on every submit instead of re-using the buffer contents.

buffer_compress_chunk is simply the size of the compressible pattern. I chose to match it with ZFS record legth which is 128K or 131072 bytes.

buffer_pattern is the pattern to use for compressible data. Needs to be specified to prevent FIO default of using zeroes.

end_fsync instructs FIO to fsync the file contents when a write stage has completed.

group_reporting is to aggregate results of all processes.

clat is completion latency, and we can see this test saw min of 68 us and average of 74.98 us.

bw is throughput and this test achieved 1000MiB/s

However, this was just an example test to manually verify that everything works as intended. Lets view the file it created..

So, it did create a 2 MiB file as we expected.

Nice. Our ZFS system compressed this 2 MiB file down to 165 KiB because it was generated with 100% compressibility setting.

Let’s peek into the file to see what content was generated..

It’s our requested pattern in the entire file because we asked for 100% compression. Let’s modify this test slightly to make it generate 0% compressible data..

It is using all of 2 MiB because it was not compressible as we expected.

As expected, file is filled with random data which was not compressible.

Based on this setup, I set up a few tests by varying two parameters, compressibility and load(numfiles). Here is how my test matrix looks like..

Note: data set set size increases in steps of 128 GiB along with the number of processes.

Keep in mind that my test system has 768 GiB of memory. So I tailored my test in a way that my dataset gets bigger than the total amount of memory at some point during the test. 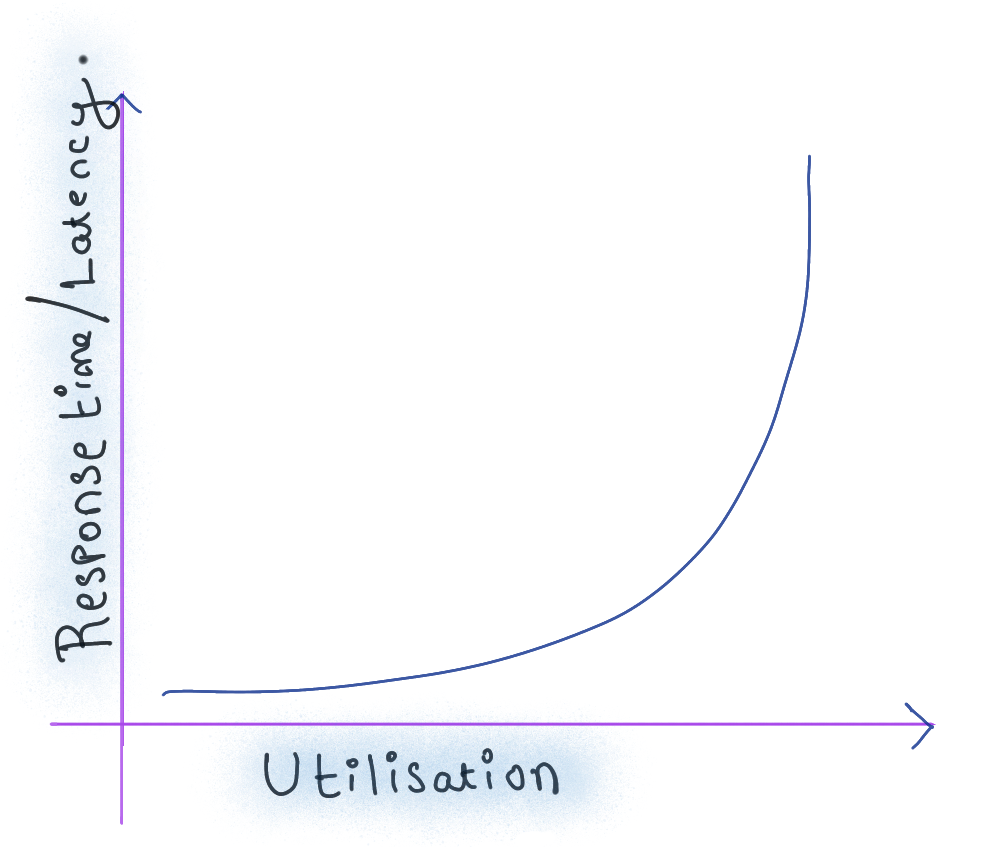 Woohoo! if the data is highly compressible, ZFS munches it much faster because there are fewer disk writes. Infact, at peak throughput the disks were averaging only about 5 MiB/s. Looking at the data together,

Out of curiosity, I took a look at the performance of the system while the IO test was in progress. Here are some pleasant sights I had. 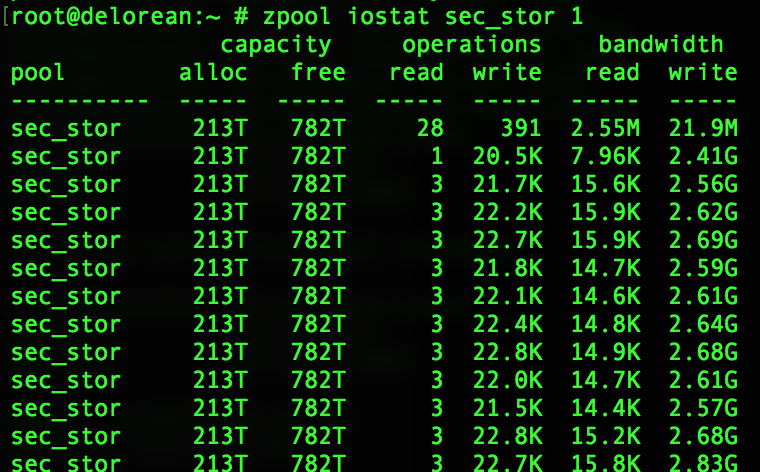 To put this in perspective, the network interface on this server is a 10Gbps link.

Our backup server is servicing writes faster than the 10 Gbps network it is connected to!

While this is happening, here is htop..

Good that the fio processes are not CPU bound.

Here is another view of individual disk’s util through systat.. 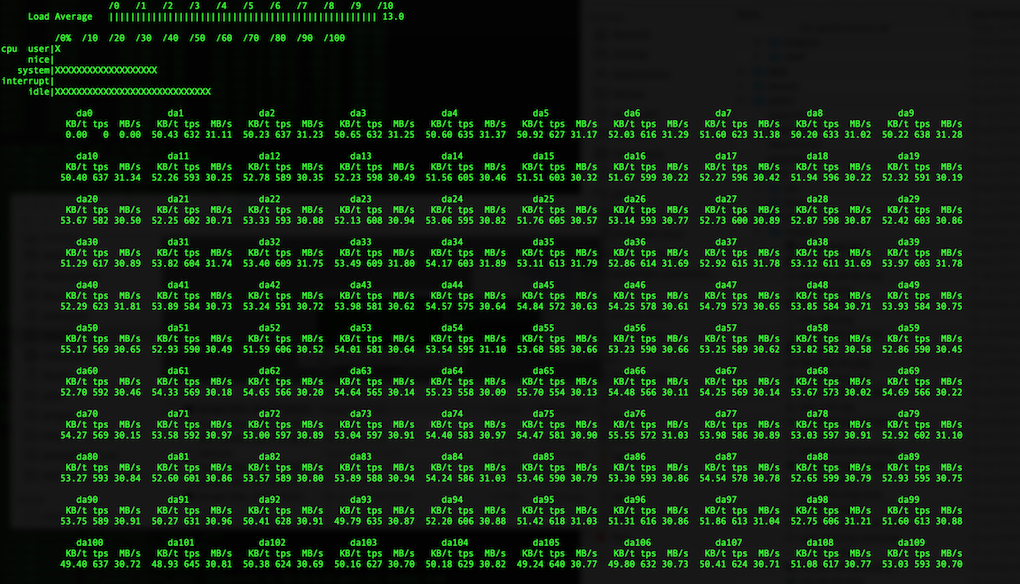 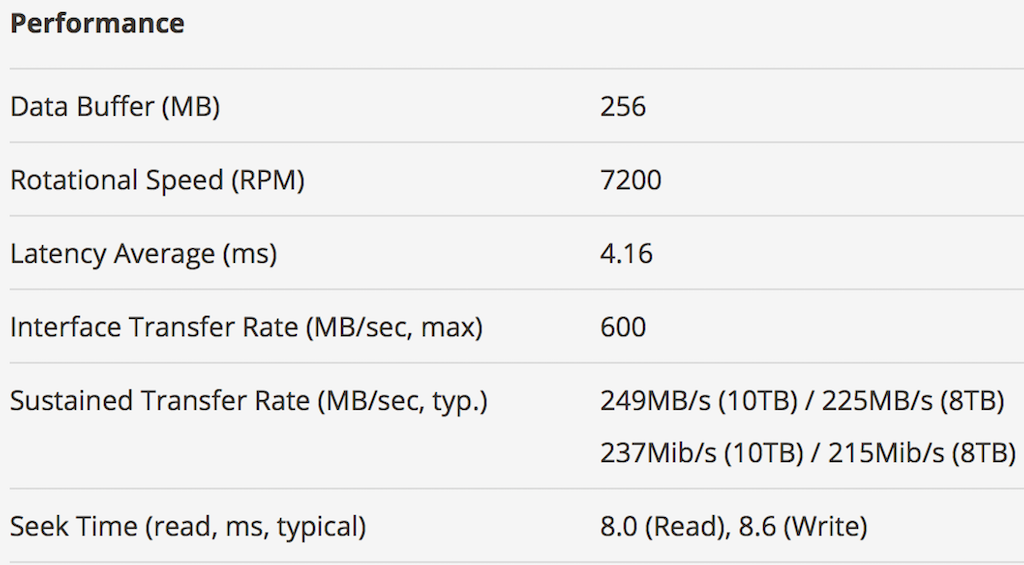 Deriving performance out of disks is more complicated than this. The manufacturer ratings dont apply for all conditions in which the IO hits the disks. IO sizes often play a big role in determining max throughput from a disk. Another factor is caching infront of the disks, and in the storage drivers. As an example of such wild swings, here is a snip from Matthew Rocklin’s research into disk throughput vs file size. 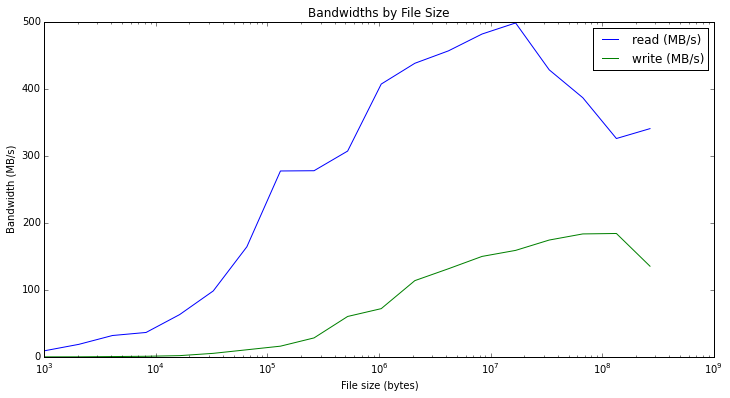 There may be opportunities to remove bottlenecks and further improve performance. But, that would be useless when the 10Gbps network is already a bottleneck.

It was fun looking at the performance of the ZFS server in the context it will be used at. I’m amazed particularly by how ZFS handle compressible data with ease. At some point it should become the default. Knowing that the system I built exceeded performance goals is always good. Hopefully, these notes above helps others tailor their test cases to anlyze different scenarios.